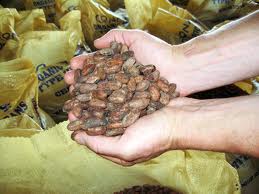 On 28th May Llangollen linked up live with Honduras to talk to Xiomara Paredes from the Latin American and Caribbean Network of Small Fairtrade Producers (CLAC). CLAC is an alliance of producers from 21 countries, mainly in South America. Through a live videolink hosted by Llangollen Friends of the Earth at St. Collen’s Community Hall, people from Llangollen were able to see and speak to Xiomara, an employee of CLAC.
Xiomara told us about the effect climate change is having on producers growing fairtrade products such as sugar, coffee, tea and wine.  We heard stories from different producers in many countries, who told us how the changing weather such as irregular rainfall is causing up to 50% reduction in crop production.  In Costa Rica the temperatures are warmer than usual in the night and colder than usual in the day, which has meant that oranges are turning yellow instead of orange, so they are rejected for export.  CLAC is working to increase producers’ ability to adapt to climate change, and to represent the growers in the global political arena.
The message from the videolink was clear: a direct ask from people whose livelihoods depend on the environment, for us to cut down on our carbon emissions.