Llangollen Friends of the Earth support Phil Jones’ campaign for Dee Valley residents to be allowed to use Plas Madoc recycling centre.
We believe that waste reduction is most important, and that retailers and manufacturers have a key role to play in reducing waste. However in Llangollen and the Dee Valley we have a situation where people are currently driving a distance three times that of the distance to the nearest facility in Plas Madoc. That is inconvenient, wasteful and bad for the environment.

We understand that some negotiation has taken place over the years between Denbighshire and Wrexham councils over this issue. Concerns about cost and usage monitoring have been mentioned as possible stumbling blocks. However recent developments could help move past those blockages. For example Denbighshire’s new online booking system could be expanded to include the Plas Madoc facility for Dee Valley postcodes. The exact usage can then be monitored, and Denbighshire could then be billed using those figures.

It is clear that other towns in Denbighshire have much better levels of service, and we would encourage Denbighshire council to re-deploy resources more evenly. This could be achieved by increasing the number of days on which the pop-up facility operates. If the hours could be increased for the pop-up facility, then this would become a more convenient service, and could be especially useful to those who do not have access to a vehicle, or those who would prefer not to travel out of town to dispose of waste.

We would encourage members of the public to write to their councillors regarding this issue. But also to consider the source of the problem, and to contact retailers about the amount of packaging they receive with goods. If members of the public would like more information or to take things further locally, then there are a number of groups in the area campaigning on waste issues. 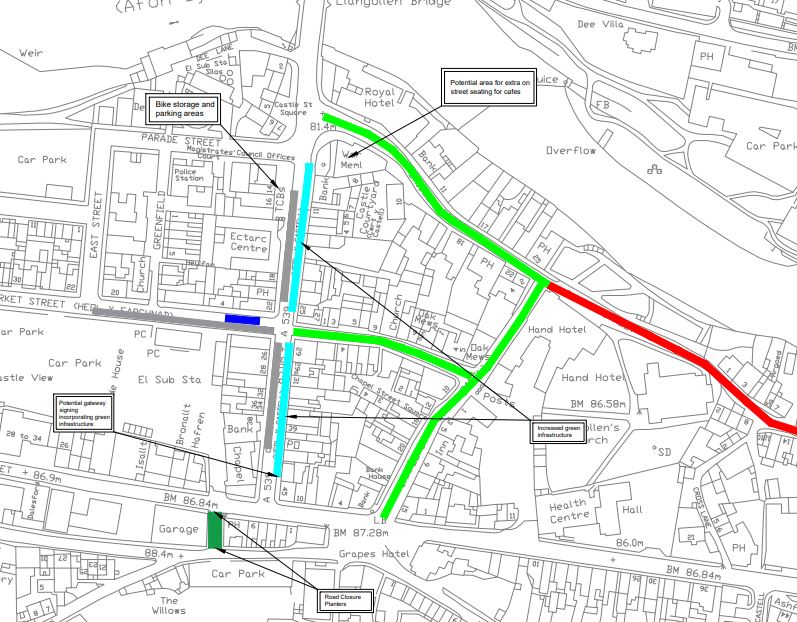 Denbighshire council have obtained funding to modify roads and pavements in Llangollen to allow people to move around town more safely during the Covid-19 pandemic.

The LDP will steer development within Llangollen and the whole of Denbighshire over the next 15 years. This is an important chance for you to influence how that development takes place.

A number of sites in Llangollen have been submitted as ‘Candidate Sites’ for development. Here is a guide to the sites…

Some thoughts on the youth club playing field site;

Some thoughts that apply to all 3 of the Maesmawr road sites;

The deadline for submissions is 30th August 2019.

Denbighshire’s LDP is considering a number of candidate sites for development, and the playing fields off Vicarage road is one of them.

The deadline for responses is 30th August 2019. For information, the playing field site has reference CS-03E-170. You can see the full list of Llangollen sites here.

Llangollen Friends of the Earth and XR Rebellion NE Wales are asking Denbighshire County Council to declare a Climate and Ecological Emergency at their meeting on 2nd July.

Please take two minutes to contact your county councillor using our easy to use form, and ask them to support Denbighshire declaring a climate emergency. CLICK HERE or above to access the form.

The Big Bike Ride event was organised by Llangollen Friends of the Earth, and was part of the Sustrans ‘Big Pedal’, a national event involving over 2,000 schools. More than 70% of pupils from both the English and Welsh medium primary schools decided to cycle, scoot, or walk to school that day instead of travelling by car.

The event in Llangollen was covered by ITV Cymru/Wales as well as BBC Radio Wales. You can read more about the event here.

A new M4 will affect ALL of Wales. By spending over £1.5 of borrowed money on 14 miles of motorway in the South, Active Travel and Public Transport all over Wales will suffer. The new road will…

If the Welsh Government go ahead with this road, the ideals of the Well-being of Future Generations Act will be in tatters.

This fight is not just about the road, it is about our ability to tackle climate change and the future Wales we want to see.

In Llangollen 240 children got together on Friday 29th March to cycle to school.

The event was organised by Friends of the Earth Llangollen, and was part of ‘The Big Pedal’, a national event involving over 2,000 schools More than 70% of pupils from both the English and Welsh medium primary schools decided to cycle, scoot, or walk to school that day instead of travelling by car.

Elin aged 7 said “It was really fun to cycle to school with my friends. Usually there are lots of cars at school which makes it difficult to cycle, but today there were hardly any cars and it was a lot better. I wish it could happen every day.”

Friends of the Earth Llangollen group coordinator Warren Davies said “Today has shown how easy and fun cycling can be. It wakes you up, it’s better for your health, and it’s just fun being outside in the fresh air. I have two young children and we would prefer to cycle to school every day. When they’re a bit older I’d like them to be able to cycle on their own, but the number of cars and lack of safe routes makes this very difficult.”

“We know cycling or walking is better for climate change and air pollution compared to driving. We also know that children are more at risk from the effects of pollution, so it’s important that we do more to improve air quality. The Welsh Government launched the Active Travel Act in 2013. To make progress we need the Welsh Government to provide more funding and clear leadership to councils in Wales.”

Headteacher of Bryn Collen, Lisa Howden said “Our learners love a challenge and we’re delighted to have taken part in the Big Pedal. We’ve been focusing on physical well being this year, taking part in Fitness Frenzy each break and the Daily Mile, so encouraging everyone to be active on their journey to school really complements that. We’re proud that our learners are aware of, and want to learn about, environmental and social issues. One of our year groups has recently chosen to learn about air pollution, so this event is also a practical response to that!”

Headteacher of Ysgol y Gwernant, Bethan Jones said “It’s great to be encouraging pupils and parents to walk, cycle and scoot to school. We have a responsibility to teach our pupils how to develop healthy lifestyles. It also links in with our Eco school initiatives and reduced traffic and pollution outside the school.”

In the UK 2,091 schools, nurseries, further education centres and after-school clubs are within 150 metres of a road with illegal levels of nitrogen dioxide.1 Air pollution costs lives and billions of pounds. It is one of the UK’s biggest killers, causing up to 36,000 early deaths in the UK every year, more than obesity or alcohol. Dirty air leads to worsening asthma symptoms, heart disease and even lung cancer. Air pollution has even been associated with changes in the brain linked to dementia and can lead to children growing up with smaller lungs.

The event organised by Llangollen Friends of the Earth aimed to encourage children and parents to consider cycling or walking to school instead of driving, showing how fun and beneficial it can be.

Thank you to Discount Sticker printing for your support of Llangollen Friends of the Earth! The banners were fantastic, and the stickers were a big hit with the 240 children who came along to The Big Pedal.

All top quality stuff delivered very quickly. Many thanks!

Llangollen and District Friends of the Earth signed up to the Refill Cymru campaign to promote free tap water in Llangollen. The aim is to reduce the use of single use water bottles in the town and therefore reduce litter and plastic pollution.